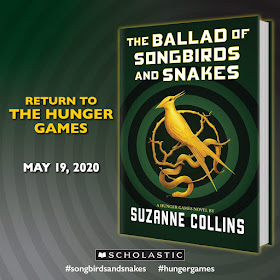 The title and cover for Suzanne Collins' new Hunger Games book have been revealed: The Ballad of Songbirds and Snakes. We also learned through Scholastic that the book will begin 64 years before The Hunger Games on the morning of the reaping of the 10th Hunger Games.

So let's take a look at the cover and title more in-depth. Obviously, songbirds and snakes both played a symbolic role in The Hunger Games trilogy, with the mockingjay being the symbol for the district rebels and snakes (or a snake) symbolizing President Snow.

The Songbird
The title and image make me think we will learn of the origin of Madge's mockingjay pin and how the songbird became a symbol for the rebellion. We know that it once belonged to her aunt Maysilee Donner and that Maysilee wore it during the 50th Hunger Games. Beyond that, we don't know how Maysilee acquired it or where it originated from. I think this book (or perhaps it will be a series) will give us those answers.

The Snake
Throughout the trilogy, President Snow has represented a snake. In Catching Fire Katniss calls his eyes "snakelike" (p. 17), compares seeing him to a "fanged viper" (p. 18), and even admits she treats him as though he is a venomous snake (p. 19). In Mockingjay, Finnick reveals how President Snow rose so quickly to power: poison. Katniss thinks, "Poison. The perfect weapon for a snake" (p. 171).

Will we see a young version of President Snow in this book? It's hard to say how old he is in the trilogy because the Capitol citizens have access to amazing gadgets and medicine to keep them looking younger and he already looks quite old. We do know he is a grandfather. I'm going to guess if we do see President Snow in this book, it will most likely be his child or young adult version. If Collins makes this a series, though, there is a chance we will get to see his rise to power and Finnick's scandalous stories will come alive on the page. Finnick does say that Snow was "Such a young man when he rose to power" (p. 171). This makes me think that we will somehow see the beginnings of Snow's snake-like rise to evil. At the very least, we will see his predecessor.

Other Characters?
With the book rewinding 64 years, it's safe to say most of the characters from the original trilogy will be absent from the novel. However, there could be some. Mags from District 4 was elderly, so there's a chance she could be in it. As I stated before, President Snow--or Coriolanus--could be featured as a child or a very young man. Katniss has said Ceasar Flickerman has been around forever, but could he be old enough to be in the 10th Games? Probably not.

Narrator?
I do wonder who will narrate the book (or whether it will even feature a first-person narration). Will it be a district citizen? A Capitol citizen? Or will it feature multiple perspectives?

No matter what the novel reveals, I'm just elated Collins is expanding the Hunger Games world. I can't wait to meet the new characters and learn more about this time period in Panem.


Image courtesy of Scholastic, Inc.
Pre-order your copy of the book through scholastic.com/hungergames
Tracee Orman at 10/04/2019 10:00:00 AM
Share