Suzanne Collins' New Book Goes Back to the Dark Days

With Scholastic's recent announcement that author Suzanne Collins will release a prequel to The Hunger Games trilogy May 19, 2020, it's a perfect time to review what we know about the time leading up to the series and speculate on the contents of the prequel.

Collins released a statement regarding the setting and premise of the novel:


“With this book, I wanted to explore the state of nature, who we are, and what we perceive is required for our survival. The reconstruction period 10 years after the war, commonly referred to as the Dark Days — as the country of Panem struggles back to its feet — provides fertile ground for characters to grapple with these questions and thereby define their views of humanity.” 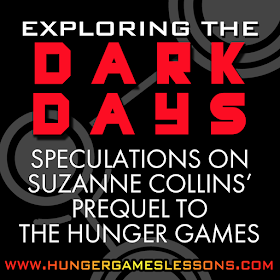 Based on this information and what we know from reading the series, we can deduce the following:

1. The prequel will be set 10 years after "the brutal war for what little sustenance remained" (The Hunger Games, Collins 18). Panem and its 13 newly-formed districts were formed after the war and "brought peace and prosperity to its citizens" (18).

2. Obviously, the "peace and prosperity" was short-lived or was a farce because the Dark Days--the time after the war and formation of Panem--is when all the districts organize the first uprising.

3. All of the districts are defeated by the Capitol and District 13 is destroyed (above ground, anyway) during this time period. We also know that two rebels for every Capitol citizen were killed during this uprising (Catching Fire, Collins 172).

4. The Capitol created some of their killing "pods" in the city during the Dark Days (Mockingjay, Collins 251). They also bred genetically-altered animals (muttations or mutts) such as the jabber jay--used to record private conversations--during this time (The Hunger Games, Collins 42).

5. District 13 started the rebellion that caused the Dark Days, "then abandoned the rest of the districts when the tide turned against it" (Mockingjay, Collins 357).

6. The Capitol wrote and enacted the "Treaty of Treason" with new laws to guarantee peace. As part of the new laws, the Hunger Games is formed as a "yearly reminder that the Dark Days must never be repeated" (The Hunger Games, Collins 18). In addition, all of the Quarter Quell rules were created as part of these new laws (Catching Fire, Collins 172).

(These questions are pure speculation; I have no idea if these questions will be answered. I am merely guessing based on Collins' statement.)

• What happens in those ten years that cause the districts to uprise? What was the tipping point to cause District 13 to initiate the rebellion? What pushed the citizens over the edge?

• Was Panem a democracy before the rebellion? Were districts independent?

• Could citizens travel freely from district to district? Could people communicate with citizens in other districts? Were the districts fenced in or were the borders created during the Dark Days?

• How long did the rebellion/Dark Days last?

• Why did District 13 turn their backs on the rest of the districts when the Capitol started to gain control of the rebellion?

• Why did Collins decide to return to Panem after stating she was ready to move on? Was the current political and global climate an inspiration?

What questions do you have that you hope to have answered? Are you excited for the new novel? Do you have a countdown until May 19th? Share below in the comments.