Book Review: The Ballad of Songbirds and Snakes by Suzanne Collins 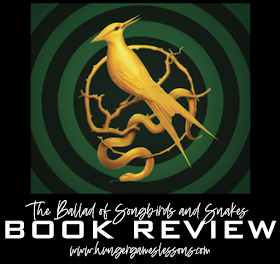 When Suzanne Collins ended Mockingjay with the line, "But there are much worse games to play," she was right. And here they are.

I've spent the past week reading and re-reading parts of The Ballad of Songbirds and Snakes, the newest release from author Suzanne Collins and the highly-anticipated prequel to The Hunger Games trilogy. Needless to say, there's a lot to digest in the 517-page book. The novel is written in third-person from 18-year old Coriolanus Snow's perspective. This differs from The Hunger Games trilogy, which is written in first-person from Katniss Everdeen's perspective. I did not have a problem with the way it was written since we still "see" things through Snow's point-of-view. I actually loved that the reader was able to see a young Snow and learn more about this man's rise to power. Of course, this is just a glimpse because the entire novel is only comprised of about three months of his life. Three very formative months, of course.

It begins on July 4th, Reaping Day for the 10th Hunger Games in the Capitol. From the beginning, I love how Collins gives us information we craved but didn't get in the original trilogy, like the date of the Reaping. We learn that Snow is being raised by his grandmother (his dad died in the war and his mom died during childbirth, along with his younger sibling). But what was the biggest revelation in the second paragraph is that his cousin is none other than Tigris, the former stylist who feeds and shelters Katniss, Peeta, and Gale on their quest to kill President Snow in Mockingjay. This surprise adds dimension to both characters and what I really love about this book. It really makes you want to reread the original trilogy with a fresh lens. And this is just the beginning!

We learn that the Hunger Games is not very popular with the citizens of the Capitol and that the district tributes for the past nine years have never had mentors. In fact, viewing of the Games is not mandatory for ANY citizens and the arena is a dilapidated coliseum. The "challenge" for the 10th Hunger Games is to get more people to not only view them but to engage with them. To do so, it is decided that the brightest youth from the Academy will mentor the tributes. Just as district children are reaped for participating in the Games, the Capitol youth are assigned their district tributes right before the Reaping. Snow is assigned the District 12 female tribute, which he takes as a slap in the face. But when it turns out his tribute is 17-year-old Lucy Gray Baird, a spunky singer with a touch of vulnerability that makes her an instant fan favorite, Snow has some hope that maybe he didn't get the absolute worse tribute.

Collins is able to let us feel smidgens of empathy for the young Snow; more importantly, though, we get to see why he does what he does. His family is no longer rich and he's desperate for a scholarship to the university. Being a mentor of a winning tribute will secure him a scholarship so he can continue his studies and hope to someday rule Panem. So whatever he feels for Lucy Gray, it's always in relation to how she can secure him the future he feels he is owed. He is the epitome of privilege. He even refers to her as "his." Their relationship is very complicated, of course, but it forces him to make changes to the Games to help Lucy Gray survive. I truly loved seeing the Games evolve in the first two parts of the novel. We see Snow struggle with ethical dilemmas between his classmate Sejanus Plinth–who definitely serves as a moral compass–and Head Gamemaker Dr. Volumnia Gaul–evil incarnate. The two polar opposites make Snow wrestle with his own ethics. And while we all know what becomes of Snow, there's that sliver of hope that he will choose good over evil.

Collins also introduces us to Dean Casca Highbottom, the mastermind who created the Hunger Games. He's a complex character who reminds me of Haymitch: he has the potential to be a good influence on Snow, to take a stand against the barbarism of the Games, and yet, he turns to alcohol and drugs instead. It made me wonder if he had taken Snow under his wing how differently things could have turned out? Alas, the heartbreak of the book is that we know all these opportunities for Snow never come to fruition.

Another thing I love about the book is that we get to return to District 12, which presents so many references to the trilogy. For instance, Lucy Gray composes the Hanging Tree song inspired by another character we see hung for attempting to spark another rebellion. How fitting that this same song is used in the rebellion in Mockingjay. And not only did Lucy Gray write that song, but she also composed the Meadow song, which Katniss sings as Rue dies in the 74th Games. All these little Easter eggs bring new understanding to Katniss' rebellion and Snow's utter aversion to District 12.

I can't say that I completely loved the book as much as the original trilogy. I didn't connect as deeply to the characters and part of me kept wondering how many years the book would cover and if we would fast-forward to the falling out between Tigris and Snow. The fact that the book contained an epilogue makes me believe that this is it for the series. 😭 But I wish we could have one more book from Tigris' point-of-view set about 50 or so years later that covers her falling out with her self-serving egotistical cousin. I think I would be much more emotionally invested in her perspective. It would also show us more of the behind-the-scenes workings to the Games, this time from a stylists' perspective. Even if we don't get Tigris' story, I love that Collins made her character more dynamic. In Mockingjay, Katniss describes her as another shallow Capitol showboat until she was banned from the Games. The Tigris we see in Ballad is nothing like that. I want more of her story.

I also found the catch-phrase "Snow lands on top" a little overdone. I don't know why it began to grate on me as the book went on, but somehow it did. Maybe it was Snow's all-consuming arrogance that was more annoying. I did appreciate Collins including the mockingjays and his hatred for them. The line from page 516 "...she and her mockingjays could never harm him again" struck me as funny because we know Katniss–as the mockingjay–will cause all sorts of problems for him, and yet, he is absolutely right. Katniss doesn't kill him in the end. Instead, it's his arrogance that kills him as he laughs so hard at Katniss killing Coin that he chokes himself to death. And then is trampled on. Definitely not landing on top.

In all, I thoroughly enjoyed this book. I definitely think it will be a great classroom staple and I will be creating teaching materials, as well. I think your students will love the richness it brings to the other novels.