The final movie in the series, "The Hunger Games: Mockingjay Part 2" was a satisfying, albeit bittersweet, ending.

For those of you who have not read the books and do not want spoilers, I will give you this: we get much more Katniss, Peeta, and Gale. Jennifer Lawrence, Josh Hutcherson, and Liam Hemsworth work so well together and do a spectacular job portraying the characters from author Suzanne Collins' trilogy.

We see very little Haymitch (Woody Harrelson) and even less Effie (Elizabeth Banks); their absence is felt with the lack of humorous exchanges and lightheartedness. This is a dark, serious film without the one-liners the the previous three films had. Which is appropriate: the final book in the series is a solemn, pensive resolution to the war-torn Panem. The fact that many of the serious lines spoken by Plutarch (Philip Seymour Hoffman) were either delivered via a "letter" or cut adds to the somberness.
But make no mistake: this is the mood that is appropriate for the conclusion. Any attempt to lighten it would have been a slap in the face to the series.

I highly recommend seeing it; but even more, I beg you to read the books first. So much is glossed over and left out, leaving the viewer to fill in the blanks from the novel. I think those who have not read the book will be left with some unanswered questions, many of which are answered in the book.

OK, time to move on to the specific scenes I felt were important. This means there are SPOILERS ahead! 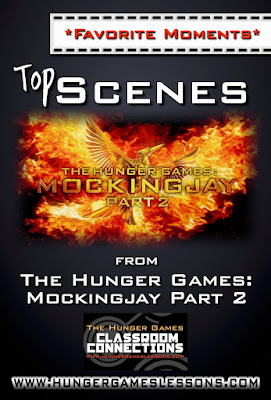 My favorite moments from the movie include:

1. Beetee and Gale discussing bombing methods (including studying the hummingbird's flight patterns--thank you for including that detail!): This was a subtle moment and if you weren't listening you may not have caught it, but it was definitely essential to include in order for the resolution to play out like it does in the novel. By the way, was it just me, or was Liam Hemsworth wearing eyeliner? I swear Gale had more eye makeup than Katniss. It looked out of character.

2. Commander Paylor as a strong leader: I was surprised how Paylor (Patina Miller) was portrayed in Part 1. Why make her look like a peasant? She is a strong woman in the book and knowing she would become the leader of the country in the end, I was disappointed that Francis Lawrence didn't portray her character that way. So I was extremely glad to see her more polished and confident in Part 2.

3. Katniss getting shot in the subway tunnel to the Nut in District 2: Though it's not as emotionally charged as in the book (when we get all the reminders of her father), it's an intense moment and played out well on screen.

4. Finnick and Annie's wedding: Again, so much was cut, but viewers get to enjoy a poignant moment between Prim and Katniss, a funny exchange between Katniss and Johanna, and a tender kiss between Finnick and Annie.

5. Peeta joining the Star Squad and Katniss telling him his favorite color, among other things: This scene brought tears to my eyes. Even though I know Katniss flees in this part in the novel, this is one moment that she could have broken character and just paused a little longer before fleeing to Gale's side. It was awkward when she plopped down next to Gale after that. But, I remember wanting to slap her at that part in the book, so I guess director Francis Lawrence was successful in capturing the emotions of that scene.

6. Seeing what the "holo" looks like and how it works, finally: I had a hard time picturing the holo and the Capitol pods in the book, so I appreciated Boggs (Mahershala Ali) showing us. I also appreciated the pods correlating with those in the book. While many were left out, the important ones remained.

7. The tunnels and lizard mutts: Though I hated, hated, hated seeing Finnick defeated, this sequence was intense and well done. I missed Peeta delivering the line about how valuable Pollux (Elden Henson) was, but it was an emotionally-charged moment with Castor (Wes Chatham), nonetheless. And those mutts...oh my gosh. Terrifying. Seriously horrifying.

8. Tigris' den: Her basement was how I imagined and I'm glad Gale and Peeta had the conversation about Katniss, though I don't think it had the same impact that scene delivered in the novel.

9. The girl in the lemon yellow coat: Again, thank you Francis Lawrence for including these little details that mean a lot to the fans of the book. While movie-goers may not notice the symbolism, book-enthusiasts know anything yellow and child-like represents Primrose, also a yellow flower. (Just like Rue.) When the rebels gun her parents down, and then her, we realize that the rebels are just as ruthless as the Capitol Peacekeepers. The sense of foreboding is apparent; we know another innocent life is about to be taken.

10. The "Capitol" parachutes, which are, of course, the rebels: While the book portrays the children as a shield to protect Snow, the movie shows a kinder side of him, telling the audience that the children should be saved first. I think it was smart to go that route. The movie also speeds up this moment like the book did; we barely have time to register what has happened when all of a sudden, there's Prim, then Boom. All is black. I wish the movie showed Katniss questioning why Prim was sent in as a medic, which would be another clue that Coin is evil. People who haven't read the book must rely solely on President Snow's words in the rose garden.

11. Katniss killing Coin: Yes, just as satisfying in the movie as it is in the book.

12. Crazy Cat: This is where the tears started rolling down my face. Just like in the book, Katniss's depression is all-consuming and it's not until she grieves with the stupid cat that both she and the reader (or, in this case, the viewer) begins to sob, as well. Is this moment as touching for those who haven't read the book? Probably not.

13. The kids: Seeing Peeta and Katniss with their children, and Katniss delivering the acts of goodness (though I think she used kindness in the movie) routine and the "there are worse Games to play" line was definitely a satisfying end. That baby, though. She was cute, but not so sure about the casting of her. I know it's picky that I should be critical of a baby, but the girl was born first in the book. And they are both playing in the meadow at the end. It's fine to have a baby in this moment, but all I could think was that she didn't look like either one of them.

SHOCKING MOMENT OF THE NIGHT:

What was that kiss between Haymitch and Effie!!?? Was definitely more than just a playful tease on Haymitch's part. The entire theater reacted in some way, either with a gasp of shock, a laugh, or an encouraging hoot. I was one of the gasps. My husband was one of the "bow-chicka-wow-wow" hoots.

COMPARING THE FINAL MOVIE TO MY PREDICTIONS...

Last year I wrote that there were 13 essential scenes from the book left (after MJ Part 1), and predicted whether they would make it into the second part or not. I'm surprised that many of my predictions were actually right or close. Here's an abridged version of what I wrote, with my comments reflecting on how it was portrayed:

1. Gale and Beetee's death traps: *MUST BE IN MOCKINGJAY PART 2*
Yep, made it in.


3. Finnick and Annie's Wedding: *MUST BE IN MOCKINGJAY PART 2*
Yep, made it in, although it was such a brief scene.


4. Katniss and Johanna rooming and training together: *PROBABLY A MODIFIED VERSION*  Well, the modified version was basically Johanna stealing Katniss's morphine and talking at the wedding. I really wanted MORE Johanna, didn't you?
5. Star Squad 451 going to the Capitol: *MUST BE IN MOCKINGJAY PART 2*
Yes, made it in, but the sequence was a little out of order and condensed. Peeta enters when both Leegs are still alive. But I thought it worked well for the movie.
6. Hiding at Tigris's: *MUST BE IN MOCKINGJAY PART 2*
Again, a condensed version, but glad this part was included.
7. President Snow's wall of children protection: *MUST BE IN MOCKINGJAY PART 2*  I do like how the children weren't necessarily a wall of protection, but were genuinely there to make sure the children first were safe.
8. Katniss' physical and mental trauma from the bombing: *PROBABLY A MODIFIED VERSION*  The deep depression was omitted and I really don't think the full-circle of how Katniss becomes her mother from Book 1 translates at all in the movie. This was a theme that just didn't translate as well as it could have. Maybe because it is subtle in the book (I usually have to prompt my students to realize she as become her mother), they felt it wouldn't translate to the screen.
9. Finding Snow in the rose garden: *MUST BE IN MOCKINGJAY PART 2*
It had to be in there, right!?
10. The decision on whether or not to continue the Games with Capitol children: *PROBABLY WON'T MAKE THE CUT*  I was way off on this one. But I don't think this scene made much sense in the movie. I think they tried when all the victors (except Katniss) were in an uproar when the idea was brought up, then half voted for it. Katniss was the one whose mind was reeling that Coin would even suggest there be another Games. In this scene, she was silent and voted yes like she actually wanted another Games. It was so wrong in every single way. I wish they would have cut this part, because it showed us that Katniss didn't learn a single thing through her experience. People who have never read the book must be wondering what in the world is wrong with her? Did she learn NOTHING from her experience? Francis Lawrence, you really dropped the ball on that scene.
11. Katniss killing Coin instead of Snow: *MUST BE IN MOCKINGJAY PART 2*
This was an easy one.
12. Katniss being imprisoned in the Training Center for months while her trial takes place: *PROBABLY A MODIFIED VERSION*
Definitely cut short. And not having Plutarch escort Katniss home was so sad. Haymitch reading the letter just made it even worse. I think instead of the letter, they should have just reworked the lines for Haymitch. Plutarch was almost nonexistent in the movie anyway, so why not let Haymitch have his own lines? I don't think fans of the book would have cared. It was awkward hearing that letter.
13. Returning to District 12: Katniss becoming her mother: *MUST BE IN MOCKINGJAY PART 2* I'm glad they showed the Crazy Cat and Peeta coming back to plant the Primrose. And, of course, the kids. The depression wasn't really played up since Peeta came back sooner than in the book. Also, the scrap book was pretty much omitted and just a letter from Annie and a picture took its place. But, overall, I was satisfied with this resolution. 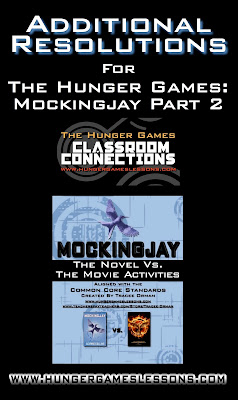 Here's a Classroom Connections activity: Have your students write their own resolutions for unresolved characters. For example, what happens to characters like Ceasar Flickerman, Tigris, Effie, and other Capitol citizens? What does Johanna do? Enobaria? Beetee? What kind of a president is Commander Paylor? Does Katniss's mother ever come back to see her grandchildren?

Students can speculate in a class discussion and/or write their own resolutions.

For additional activities, see my pack for comparing the novel to the movie: Mockingjay Novel vs. Movie Activities It is completely aligned to the Common Core State Standards. 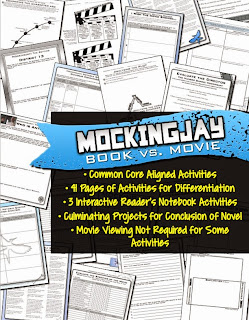