"The Hanging Tree" is Not a Dance Song 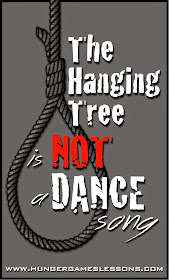 Call me crazy, but I'm not going to dance to "The Hanging Tree" song.

James Newton Howard's "Rebel Remix" of Jennifer Lawrence's rendition of "The Hanging Tree" (written by Suzanne Collins and published in Mockingjay in 2010) seems inappropriate. Every time I hear it on the radio, I have to turn it. Don't get me wrong, I thought the original version played in the movie was powerful and perfect. It was one of the most moving scenes in "Mockingjay Part I."

The "Rebel Remix"? Not so much.

Adding the dance track to the background and speeding up the melody negates the haunting beauty of the ballad. It forgets that the point of the song is to convey a feeling of misery, that death would be the favorable choice.

It forgets the tears running down Pollux's face. And it forgets those spilling from Gale's eyes, remembering his whipping and Katniss's bittersweet kiss.

It forgets the stirring images of her father teaching her the song and it forgets Peeta's memory surfacing of her father singing it in the bakery. Finally, it forgets Peeta begging to be killed after Boggs's own life is taken by the Capitol's bombs. And this is just from the novel. Let's not forget the poignant moments from the movie when the other districts summon their courage to fight the Capitol–many sacrificing themselves for the rebellion.

So why was it necessary to remix the original version? For radio play? To make more money? Isn't that exactly what the Capitol would do?

Yes. It is. Which is why the filming of the song by Castor is so unnerving to Katniss. This should be taken as a warning sign that perhaps the rebels are not so different from the Capitol leaders, after all. Though Plutarch did not air the footage of Katniss singing in the novel, the fact that they filmed it and planned to use it was enough of an indication of their true intent to rule Panem much like President Snow. This is one of the many clues that foreshadow the climax of the novel.

Of course, this also lends itself to a perfect teaching/learning moment for our students.

Perhaps our own culture lends itself to creating commercially-popular songs with disturbing messages, disguising social and political dissent with a seemingly innocent harmony. 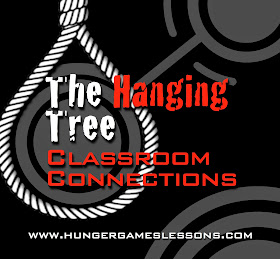 • Play the two versions of the songs for your students (embedded below).

• Discuss the differences between them. Ask your students why they think the remix was made. (Panem is fiction, of course, so it is highly likely the reason was for commercial popularity rather than social justice.)

• Have your students research songs of rebellion and songs of the (and to inspire) the hopeless from history. Instead of focusing on the words of the songs, though, focus on the melodies. Are they upbeat? Catchy? Sweet-sounding? Are they the types of songs that children may sing without realizing the meaning of the words?

Teachers interested in using this idea and many more in class can download my Mockingjay teaching unit. All ideas, activities, and lessons are original creations.


The original version from the movie "The Hunger Games: Mockingjay Part One"
(©Lionsgate Entertainment Inc.):