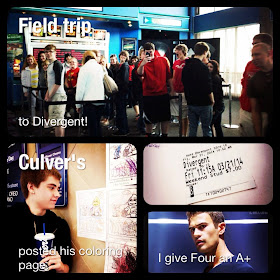 Patience should really be a virtue when writing a script for a movie. For example, if the third and final book of the series is not released yet, you should probably hold off on re-writing the scenes. Why? Well, you may cut or completely botch some of the crucial foreshadowing points. Like they did in "Divergent."

Along with my colleague, we took our senior English students to see "Divergent" on Friday. Even though I had seen it Thursday night, I was anxious to see it again with people who had read the book to see if I was making a big deal out of nothing with some of the little changes that were made.

Some of them were OK with the changes, and some felt the same as me: pretty ticked off. Although, since many of us didn't really like Allegiant, maybe making the changes means they are going to completely change the story, which might be a good thing. ;) 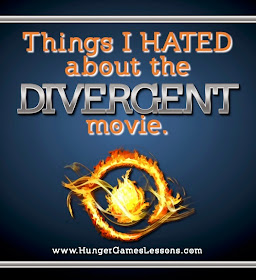 Things That Really Bugged Me About the Movie...
Please be warned there are spoilers here as I go through my biggest pet peeves of the movie (this has spoilers to Insurgent and Allegiant, as well): 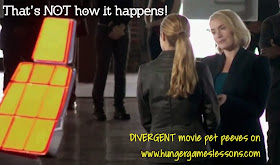 1. What's up with Tris shooting her family in her final fear landscape exam? This is completely ridiculous! She would never shoot her family. She refuses to shoot them and instead tells Jeanine to kill her instead. She even recalls Tobias saying "Selflessness and bravery aren't that different..." (page 396). Her worst fear is that her family will die and she will be responsible. So she can't shoot one of them! Let's pretend that she shoots Jeanine instead in the movie (it never really shows WHO she shoots, after all.) How will this foreshadow the climax of Allegiant? Will Tris shoot someone instead of sacrificing herself for her brother? It doesn't quite have the same effect. I actually like that she sacrifices herself for Caleb, even though he almost killed her in Insurgent. It shows her divergence; it shows that she will NOT conform to the "faction before blood" mentality.
Did they do this because they showed her do this same thing with Tobias when they are trying to shut down the simulation? Perhaps. It is a little overkill in the book. I get that. But...it still really botches the foreshadowing in Allegiant, in my opinion.

2. Four is NOT a rapist! Another fear landscape debacle: Four is portrayed as a guy who just wants to get down with Tris and she fights him off to overcome her fear. Ummm...no. That is not how it happens! Yes, he is kissing her, but she says she doesn't want to sleep with him in a hallucination. Then she pushes him against the bedpost and starts kissing and grabbing him...then she moves on to her final fear. Why change this? I felt like it was a bad portrayal of Four. 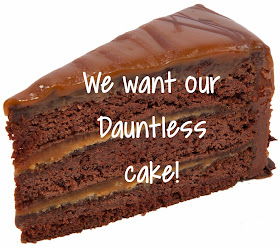 4. Tris' mother's death is less sacrificial and more accidental. While this part was still sad and touching, I don't think it's because of the changes that were made. I think Shailene's gut-wrenching cry when her mother dies was so emotionally gripping that the fact that her mother's death was shown as more of an accident was overshadowed. Again, why change this scene? OK, I get that she needed to be holding her mother for that part to register with movie-viewers, but couldn't her mother still sacrifice herself and still take down the Dauntless soldiers and Shailene still grip her mother's body and wail? Yes! So why make it seem like Shailene is doing the dirty work in the scene instead? 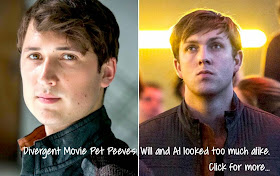 5. I can't tell Will and Al apart! This was very annoying. I felt those two actors looked a little too much alike in the movie. I thought Al would be much bigger than Will...and everyone.

6. Peter is not quite as evil as he is portrayed in the novel. I kind of like some of Peter's dialogue in the movie and I guess this part doesn't quite bug me as much as others. But why not show that he attacked Tris along with Al? Or just even more of a jerk? Though, I'm actually glad he didn't stab Edward in the eye. I don't think I could have handled that part.

7. No Trust Fall... Why not include the trust fall at the end of Tris' zip line experience? That was kind of important, considering it helped her bond with the Dauntless-born. 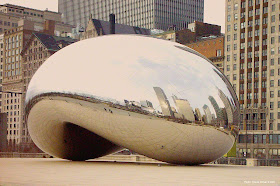 8. Where's the Bean? While many Chicago landmarks are shown, Cloud Gate (aka the "Bean") is missing, along with the sculpture the Dauntless members slide and play on (I really wanted to know which sculpture it was - the Picasso? The Calder? Come on...!). Also missing was Navy Pier's carousel during the capture the flag game. As someone who has visited Chicago numerous times and seen these things, it really bugged me. What else did you notice missing? (I'm sure there's more.) 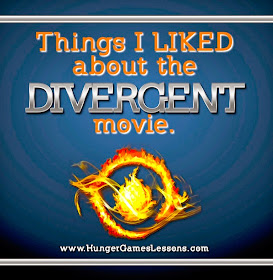 I'm sure there are more pet peeves I have, but I want to switch to some of the things I actually did enjoy:

1. Did you spot the author in the movie? One of the things I noticed the second time around was seeing Veronica Roth (the author of the series) in a couple of the scenes. I saw her as an Erudite at the Choosing Ceremony and again as a Dauntless member running up to the top of the John Hancock building to zip line. Perhaps she was in more scenes, but those were the only two I noticed.

2. Theo James is Perfect as Four. As I said in my previous review, Theo James was great. I thought he was perfect as Four. And I was OK with Shailene Woodley as Tris and then she had that moment after her mom died and I was WOWed! Plus, I liked her little comments about people underestimating her character. Those were perfect little bits of humor.

3. Uriah IS in the Movie. I was heartbroken when I heard Uriah wasn't cast in the movie. However, you may have caught a glimpse of his name on the leaderboard scenes. He was toward the top, usually around 3rd place after Edward and Peter. This makes me happy that he WILL be cast in "Insurgent."

4. Thank you for fixing the illogical scenes from the book, like the ending: It never made sense to me WHY Jeanine Matthews would ever leave the simulation control in the hands of Four when she doesn't even know if the simulation serum is going to work on him! Why leave him alone in the Dauntless compound control room? She is supposed to be smart. I am glad that this was changed in the movie. It makes much more sense.

5. Tris doesn't finish first in her class after her mother warns her to stay in the middle: This was another part in the book that I never understood. Why would Tris brush off her mother's warnings and shoot to the top of the leaderboard? It just never made sense to me to have her finish first. It's not as though they find out she's divergent and punish her right then and there. (Which, they should have so that teens reading it see what happens when you don't listen to your mother!)

Overall, I really did enjoy the movie. I thought the setting was well done and it moved at a good pace. What did you think? Did you love it or hate it? Do you think the parts they changed will affect the other two movies? Am I making too big of a deal about those parts? Comment below!